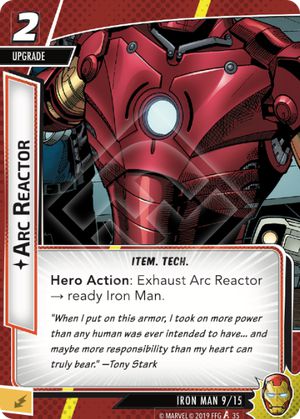 To call this a good card would be a huge understatement, this is a critical part of Iron Man’s character, he just wouldn't be nearly as strong a hero without it. It would be crazy not to play this card. Not only is this one of the tech upgrades he is required to play, the basic default use for this card is to give him an extra thwart, essentially letting this card remove two threat per turn for the rest of the game, which is way stronger than any normal card. But this card is more flexible than just that. While thwart is usually the best action for Iron Man, this card lets you do any extra action you choose during the turn. Also, there are many situations in Marvel Champions where the game tries to hose you by having an encounter card exhaust your character on a turn when you really need to exhaust to do something. Iron Man can just ready himself and do it anyway. This card more than doubles the number of basic actions he can perform during a game, since it doubles the number of actions he gets on a normal turn, but on turns when he he's exhausted by the villain and would normally not get an action at all, this card turns 0 actions into 1 action, which is better than doubling. And the Arc Reactor is even better in combination with cards that grant a bonus for an entire turn (like Lead from the Front) or indefinitely (like Heroic Intuition), as Iron Man can use the bonus on both of his actions.