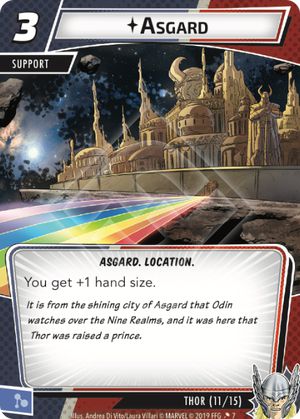 OK. Don't get me wrong, I've come to love Thor, especially because the last few packs have given us some cards that really help him along.

Still, am I the only one who thinks that Asgard is overpriced? Compare it to, say The Sorcerer Supreme... Sure, the later only works in hero form... but it's a BASIC card and applies to ONE hero (soon 2 with Scarlet Witch) that doesn't need it (Winds of Watoomb covers all you need for cards!).

I'd understand a cost of 2, and the fact that it would be stronger than The Sorcerer Supreme because it's a SIGNATURE card...