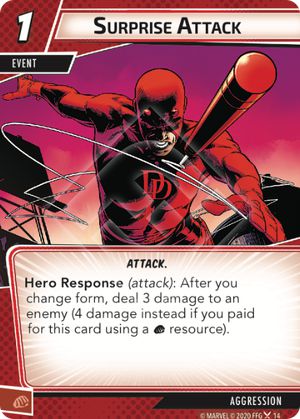 3 damage for a cost of 1 is good for heroes that change form a lot (and are optimized for aggression). I’m thinking here of Ant-Man and Wasp. For Ant-Man - this card can also be played following its draw via Resize or via his Helmet as the timing window for Response remains open in both cases - so it seems to be better used in his deck than the Wasp one that it came in.

As a low cost card, this also plays well in an Aggression Gamora deck as she does need to flip to heal and having more low cost Attack cards in her hand really helps generate that cheap attack to get the Hero thwart benefit.

Ultimately - this card is not going to be a deck maker, but for these decks - I find that it can provide a sweet spot of cheap timely damage.

Vigster · 13
Spectrum is another hero this affect works with. My experience with Surprise Attack (and similar cards) is that you need an identity with multiple hero forms for it to be reliable. The effect is not SO powerful that I accept only being able to play it half the time with single-form heroes — Stretch22 · 189 4/27/22
It's also okay for heroes who can store it for later, like Ms. Marvel and Ghost Spider. Especially because Gwen can recover, then flip into surprise attack to ready and draw off her bracelet, and Ms. Marvel can play it twice off one flip. — OrionJA · 7 5/1/22