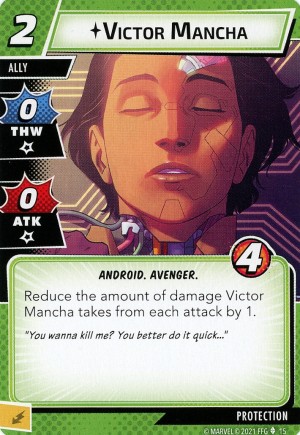 Great blocker for wimpy minions. Cheap ally. Ultron Drone minions watch out as well as Weapon Runners, Armored Guards, etc. I wouldn't say it's autoinclude, but check on the scenario first before adding it to your protection build.

While this is definitely a great minion blocker, don't be afraid to have this ally intercept the Villain's attacks as well, in particular those with 2 or less power where multiple blocks are possible. With a decent HP pool, it's also a great HP bank for when indirect damage is coming your way.

An Ally that goes well with decks using cards such as Ever Vigilant to take advantage of the Heroes high inherent stats and isn't always going to defend themselves or just multiplayer in general where minions are a much higher concern and not always able to be swept from the board.