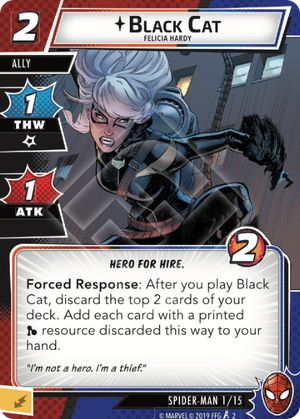 Francois · 165
good review except for the "effective resource" part, which is really overused in this game and does not really mean anything Ina game where cards are paid with cards. Bottom line is, Black Cat costs 2 resources, period :) — oam · 1 9/26/21
"where cards are paid with cards" - that's precisely why people talk about effective resources — Blackhaven · 1 12/8/21
8

Black Cat has a unique (or in the very least rare in the future) trait of no consequential damage when she attacks. This allows her to ping turn after turn without being taken off the table.

But, unlike Support upgrades that also do one damage, Black Cat's ally status allows her to get buffs from Upgrades. Honorary Avenger is needed to play some of these on her, but a Sky Cycle, Inspired, and Power Gloves can turn Black Cat into a board clearing, villain killing, eternally on the table terror!