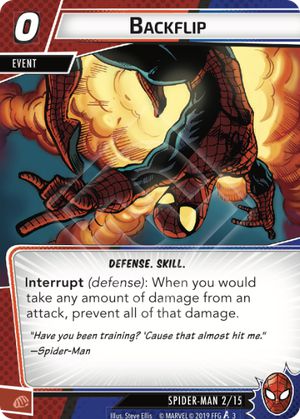 Francois · 171
It's an Interrupt, not a Hero Interrupt. Why would be unusable in alter ego mode? — gingko · 1 7/23/20
My question is in regards to backflip and overkill. If you blocked with an ally you couldn’t use backflip against the overkill damage as it’s not an attack. But what would happen if you defended a villain attack with an ally with one HP left, then that ally was killed with concussive blast: could you then use backflip to negate the damage of the attack? There is no overkill damage in that instance as it’s re-directed. Is using backflip legit in this rare case? You do not have to defend with Spider-Man to play Backflip. You only have to be the target of the attack (i.e. the defending player). If an enemy with overkill defeats your ally, you can still Backflip to avoid the rest of the damage. If your defending ally is defeated before the attack resolves, you can Backflip to avoid the damage. You can Backflip any time that you would take damage from an attack to prevent that damage. — Buddhist_Possum · 65 8/4/20
Doesn't the new defense rule mess this card up in a big way? You'd have to be defending now to used it. — Buddhist_Possum · 65 8/4/20
nvm, you just have to be the target of an attack in all cases now. — Buddhist_Possum · 65 8/4/20