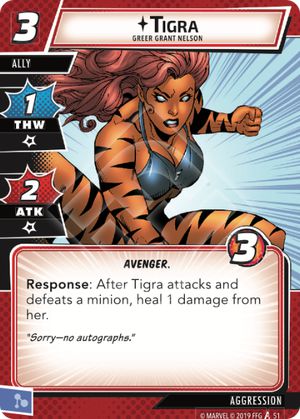 Q: Does Tigra’s “Response” ability trigger before or after she takes consequential damage?

A: Before. The “After Tigra attacks and defeats a minion...” condition is checked immediately after Tigra defeats a minion with her attack power, but before consequential damage is applied to her. -(Official FAQ)

I've included Tigra in pretty much every aggression deck I've built. The amount of times she has been actually useful to me is... like once.

Confirmation biased be damned though, I'll break Tigra down fairly:

Allies will always have hidden potential that makes them better than they appear. This is mostly because of the versatility; being able to attack, block, or thwart. Tigra in particular has the obvious application as a minion-mopper.

The main problem with Tigra is one of scenario specificity, that is to say, she shines on specific scenarios. The most notable at the moment is versus Ultron.

Although, truth-be-told, there are a good number of counters to Ultron's drones in the game already, some of which are baked directly into the heroes themselves (Captain America's Shield, Black Panther, Energy Daggers, Lightning Strike, War Machine, etc.)

It's also worth noting that all of the other scenarios primarily have minions with 3 or more health. Often demanding that you use an event, basic attack, or stronger ally to deal with. In some cases, having to do a 1-2-Punch with Tigra which can lead to wasted damage. Wrecking Crew and Rhino DO have some 2 Health minions, but they aren't really threatening enough to specifically warrant running Tigra in those games.

But all of that aside, Tigra also has a third and final issue - one of biased decision making. Motivated reasoning. It takes a nice slap-to-the-face to realize that you've had Tigra sitting off to the side-lines never being used because you're waiting for the perfect opportunity to make use of her ability. I think the best way to use Tigra, is to have her attack each turn if able. Should a minion pop up that just so happens to give you an opportunity to capitalize on Tigra's ability, that's a bonus. Otherwise; you risk not body-blocking or dealing damage because you're waiting for a golden situation that never comes.

Lastly, I want to talk about having Inspired or Enraged on Tigra.

All-in-all, personally not a fan of Tigra. But there is some numerical value there, especially with 2 or more activations of her card effect. As new packs come out, the slots in our deck start to see more meaningful competition. I will likely not include Tigra in most of my hero decks, unless I intentionally counter-build against the scenario. Although, that's because of my personal confirmation bias. She's decent enough that you can run her and gamble the results for some nice efficiency gains.