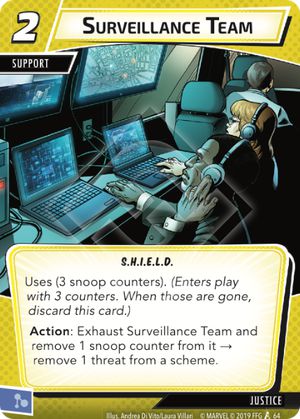 But, I actually like Surveillance Team a little bit better because there is really no bad time to play it. You could have the threat already under control and you have to sit on For Justice! or decide to just use it as a resource. Where this card is playable at any moment to help out. It's a perfect card for when you want to sit in hero form for a long period of time. You can just keep removing that placed threat in the first part of the villain phase for several turns and keep fighting.

But just to be clear, I like to include three copies of both For Justice! and Surveillance Team as they are both great cards.

Bronze · 194
Surveillance team's value has been boosted by the Sinister Motives release of Monica Chang and Homeland Intervention. — MightySchoop · 6 6/4/22