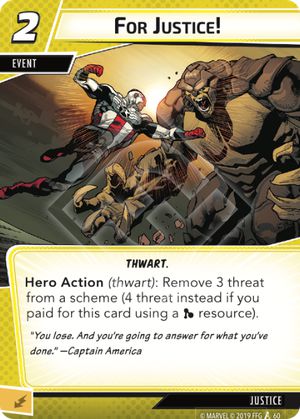 I know that there is a typical desire to rate something based on the statistics alone. This card will provide you with three threat removal for 2 resources and possibly a fourth. It will provide that threat removal as a burst. So in comparison to Surveillance Team it will affect the game in a similar manner by removing a similar amount of threat.

They are both great cards in the Justice aspect. They are both situational. When the threat on a card is getting out of control, this card will be the one your looking to see in the draw phase, but if you have only 0-1 threat on there it doesn't make sense to play this card. What you are really looking for is Surveillance Team instead.

What you can do however is alter how a future turn will look. Perhaps now that you have this card with low threat, you can consider switching to your alter-ego form in order take advantage of it and save this card for the following round when you know the threat will be much higher and this card is now there to bail you out. This can be important for heroes like Jessica Walters who prefer to switch between hero and alter-ego. This provides them a way to do so safely when they see it in their hands.

But, I actually like Surveillance Team a little bit better because there is really no bad time to play it. You could have the threat already under control and you have to sit on For Justice! or decide to just use it as a resource.

But just to be clear, I like to include three copies of both For Justice! and Surveillance Team as they are both great cards.

Bronze · 139
Question: I have to thwart with the Hero to use it, do i understand that right? — Vortilion · 3 8/27/20
Hello Vortilion, you do NOT need to exhaust your character to activate the thwart, nor do you have to be ready. The fact it calls it thwart only means it interacts with the game as a Thwart action. So if you are confused, playing this would discard your confused but not remove threat. If you must play a card after Thwarting, that card could be played following this one. It simply identifies it for game interaction. Cheers! -Ken — fixeddice · 7 1/9/21