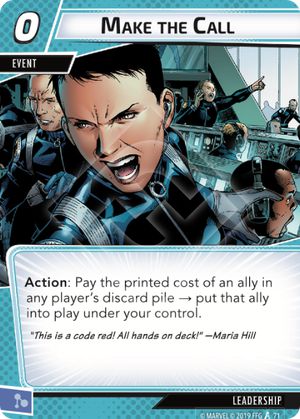 Q: When playing Make the Call, do “The Power of [Aspect]” resource cards (such as The Power of Leadership) generate 1 resource or 2 resources?

Q: I use Make the Call on an ally from another player's discard pile such as Red Dagger. Who triggers or can trigger/pay for the ability on the ally ? And who controls him? Who gets Red Dagger back in their hand?

A: Only an ally’s controller can trigger the ability of that ally. If you brought Red Dagger into play with Make the Call, then you are his controller. Red Dagger has changed control via Make the Call and is leaving play due to his ability. Resolve the entire ability that causes him to leave play. Once fully resolved, Red Dagger will return to its owner's equivalent out of play area (Ms. Marvel Player's hand). -(Developer Ruling , Rules Reference Guide "Ownership and Control" , Hall of Heroes)

Make the Call is a fantastic transformative card with some minor drawbacks to consider. MTC effectively functions as a toolbox card that allows you to use the right ally for the right situation. Regardless of who the owner is (in multiplayer games). Note that due to the wording of MTC; you cannot reduce the cost of the ally with cards like Helicarrier or Avengers Tower, because it is not being played. You also cannot use Quinjet. You CAN, however; use The Power of Leadership or Super-Soldier Serum and other cards like them. For the time being, I would say that this is a 3-of card in any leadership deck.

RolandWright · 1396
Good review. Particularly effective for heroes than can discard cards quickly, Iron Man using Repulsor Blast or Futurist for example or Ms Marvel using Teen Spirit — FreqKing · 24 1/9/20
I don't see a time when this won't be a 3-of. Its utility only increases the more allies we get - and unlike just playing an ally out of hand, MTC can be used out of turn via called action to fetch a Maria Hill to give everyone more options. — Voidrift · 82 1/10/20
I see a lot of Leadership decks without this card... I have no clue why it is not a certain 3-of card. Seriously getting Nick Fury 3 times in one deck pass is even OP. — Ben_Bos · 1 6/18/20
Note that this card let's you bypass the Play restrictions on allies like Groot and Ghost-Spider. You are not Playing them but resolving an Action ability that puts them into play, so even if you are a non-guardian and have no other Web-warrior cards in your deck, you could run both those allie sif you're Leadership and put them into play with Make The Call just fine. — Levati · 1 5/29/22