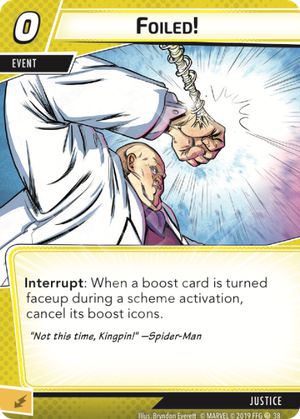 Foiled is a great card, which can be explained fairly briefly:

Is the card worth playing to mitigate 1 threat? That's situational on how much you need that resource in the given moment. It plays like Emergency at that point.

There is a critical weakness to the card, which I often suffer from with Preemptive Strike, which is being in the right form when you draw this card. In solo play, this card requires you're in either Alter-Ego form or being hit with a scheme trigger like Advance. In multiplayer,

I think this card is worth considering in a lot of Justice decks. It's a 0-cost, which makes it very approachable for low hand-size heroes like Thor (ew) or She-Hulk (less ew). I think it's solid for Iron Man since you can use it while in Tony Stark form without hampering your resources (and it's an energy resource for Repulsor Blast). Unfortunately, multiple Foileds don't stack, so Ms. Marvel doesn't really benefit all that much from the card. I also think Justice already has A LOT of ways to mitigate Threat and those ways will often compete in slot with this card (for instance, I don't run this in my Black-Widow since she already has threat locked down with preparations).

Othello · 481
My only issue with this card is that it only is effective during a SCHEME activation. So you need it in your hand when you or teammate is in Alter-ego form. You need so many things to go right just to remove 1-3 threat (Need the villain to scheme (alter-ego form or encounter card), then reveal a boost icon that you can cancel IF you happen to have this card in hand. I've played several games with it and have used it maybe twice total. Most of the time this card becomes resources. Running Iron Man or Captain Marvel as Protection absolutely add, anyone else not so much. — Novawyrm · 29 10/22/20
1

I love thematic wins like this. This card works with either form. When used in Alter-ego form I can envision Peter Parker secretly taking out a web shooter when the villain isn’t looking.

The lack of a form requirement also means it’s good for both solo and multiplayer.