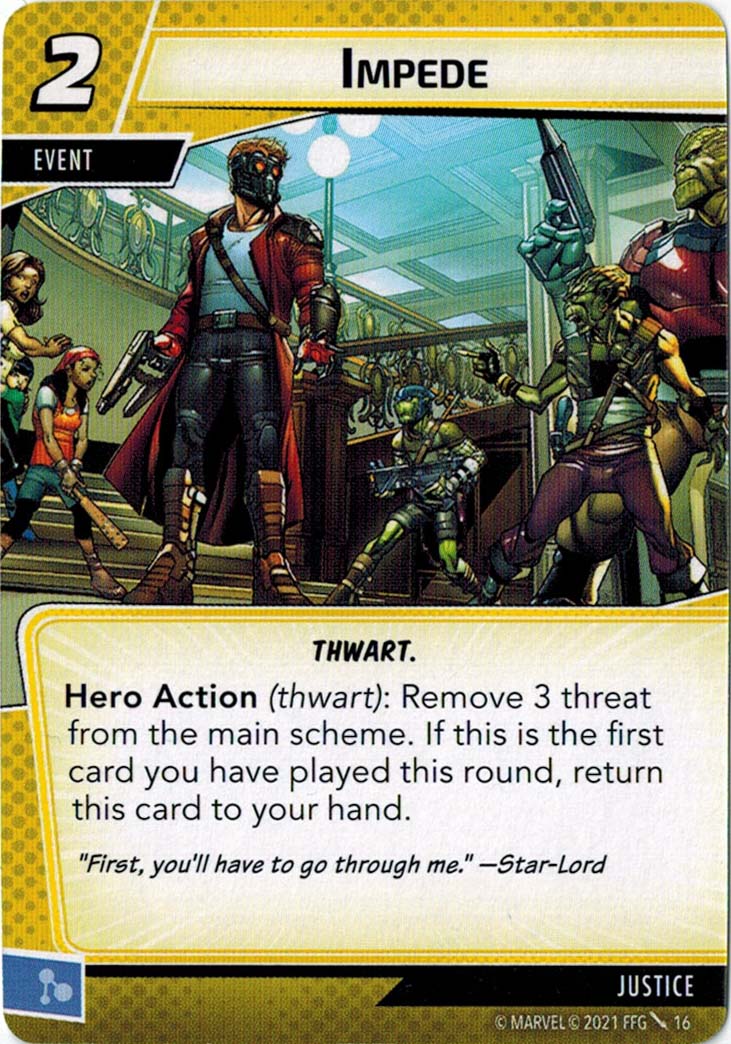 Impede is a card that is decent on its own while adding reliability to/synergy with existing cards.

On its own, it's three thwart for three resources (two plus itself), which is the standard rate one would expect from a thwart card. However, if it's the first card you play in a turn (a very easy requirement to meet), you get the card back in your hand. It's now either three thwart for two resources (and thus moderately efficient) or something you can save in hand to use again next turn (increasing the reliability of your deck). This, by the way, is where its mirror card Clobber fails. Three resources for three damage (or even three for two) is very below rate for an attack card and means Clobber fails to stand on its own merits.

However, it's when you consider the reliability it adds and the synergy it has with existing cards that the card stands out. Knowing for sure that you will always (if you desire) have a thwart card in hand is very valuable for Heroes like Ms. Marvel and Gamora. Knowing you will always have a use for any resources generated by Sense of Justice or Power of Justice prevents waste/dead turns. Knowing you will always have a consistent reliable source of thwart on the main objective, helps to more easily ensure you trigger Clear the Area or Turn the Tide's requirements, allowing you to more confidently run these very powerful conditional cards.

Impede does have some limitations/weaknesses to keep in mind. Because it only benefits from being the first card played, you generally are not going to want to see multiple copies in hand. Similarly, because you can keep the card in hand turn after turn, there is less need to have additional copies in the deck. While Impede is moderately efficient as a one off effect, it's not so efficient that cycling through multiple copies is overly impressive compared to stronger individual effects like Clear the Area, Multitasking, or Lay Down the Law. All of this leads me to think Impede is a decent option as a single copy in most Justice decks but probably not as a two or three of.

Erathis · 9
I agree with this asssessment. Outside of Gamora and others who want to splash a little Justice, this isn't a very efficient card. But if your primary role is not to thwart, then Clear the Area becomes unreliable, Multitasking becomes harder to build around, and Lay Down the Law is requires you to constantly change forms, leaving Impede as the more efficient option among them. — eapfel · 1 1/18/22