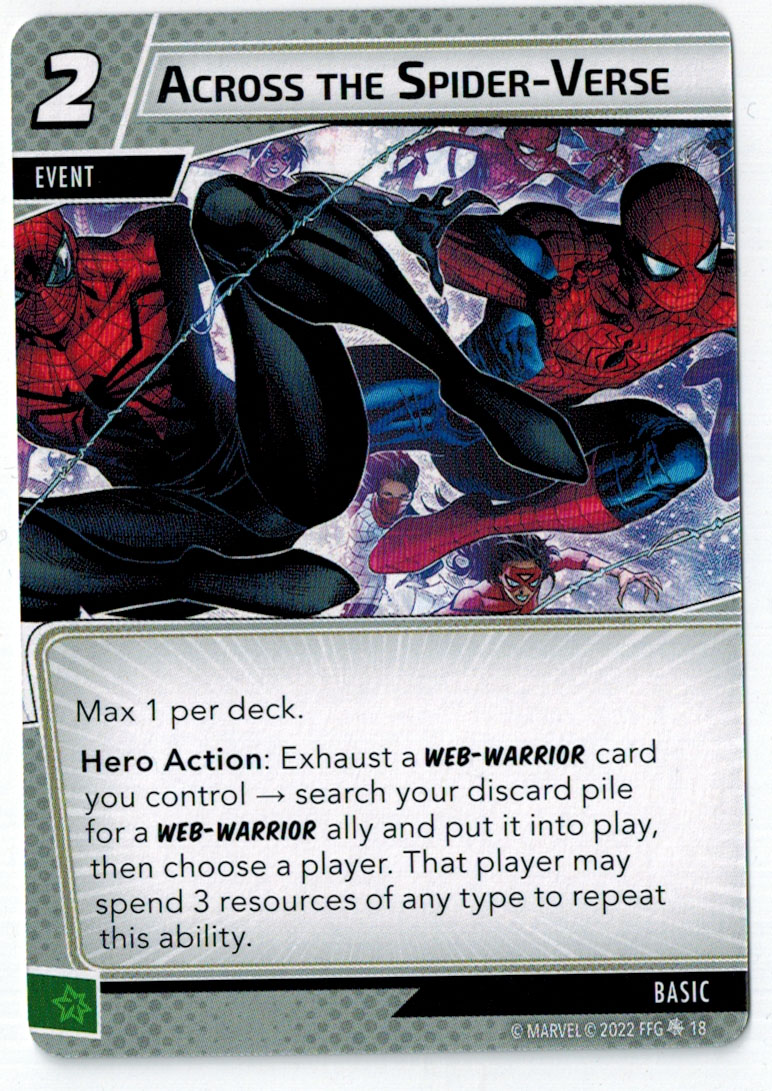 It is worth pointing out three effects on this card that make it significantly better than Make the Call.

Web warriors get a lot of value out of recycling their allies repeatedly, with both Ghost-Spider and Silk wanting to enter and leave play often, and Web of Life and Destiny being extremely pushed even with just 3-4 allies. Across the Spider-Verse plays right into this and therefore is be a slam dunk pick in any deck looking to use this package.

The_Wall · 88
How do you interpret that you can put three allies into play with this card? The card doesn't seem to allow for repetition. At most you can put two allies into play,, one for two cost and one for three. — Judicator82 · 55 4/19/22
The ability repeats, which includes the text about the ability repeating. So after you put the second Ally into play, if you somehow have another three resources, you could get a third. — Fry · 67 4/20/22
Exactly as @Fry said, you repeat the entire ability. So if you had an extra 9 resources you could switch in 4 allies, even without Triskelion, you would need to discard one but then that would trigger Web. This card is up there with Yawgmoth's Will. — The_Wall · 88 4/23/22
0

Paying two cost to bring any Ally into play may put stars in your eyes, but their are some restrictions that bring the power level of this card back down to Earth.

The second is that the Ally must be a Web-Warrior. At this time (the release of Sinister Motives in the US, April 2022) there are scarce few Web-Warrior allies to choose from. Spider UK and Spider-Man (Peter Parker) are the prime candidates, both costing three and having great effects.

The kicker that allows a team-mate to repeat the ability is even more random, requiring that they also included Web-Warriors and have them available in their discard pile.

That said, being able to tutor Allies for under cost and providing an ally the opportunty to do the same is unprecedented in Champions at this time.

I rate this card a B: Powerful and efficient, but requires careful building and a bit of luck to pull off.

Judicator82 · 55
Hobie is also a pretty efficient target for converting resources into damage. Most of the web-warriors want you to have other web-warriors in play, and Across the Spider-verse helps make that more consistent. Plus, that's another card you'll be drawing eventually with Web of Life and Destiny. This is an auto-include in the Web-Warrior tribe deck, just try to avoid paying the exhaust cost(s) with your hero. — Fry · 67 4/12/22
You can choose yourself and exhaust the first ally you grabbed to grab a second ally, which is nice. Especially for Gwen, who can save this event until she nears the end of the her deck. You can even discard the ally you really want to pay for this card, put a different web warrior into play, and exhaust them to bring out the one that started in your hand. — OrionJA · 7 4/13/22
Great point on Gwen. I myself am still learning the extent of her usefulness; you intuitively think you should be saving her Events that Ready her, but any Event is a good option keep. — Judicator82 · 55 4/13/22
Also, Hobie is fun but terribly random. You might end up hitting the jackpot, or you may have hastened an acceleration counter for 2-3 points of damage. I've had more experience with the latter. — Judicator82 · 55 4/14/22