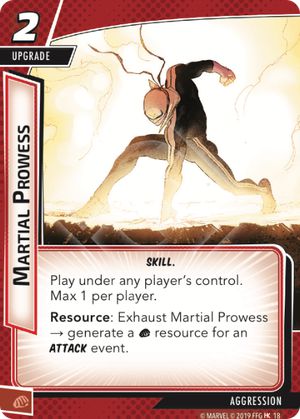 Although introduced in the Hulk pack, this card is actually kind of awkward for Bruce Banner. Only 2 of his hero cards are actually considered attack events. His pre-made deck has 8 targets for this (3x each for Drop Kick and Toe to Toe), but with 4 card hands, this will miss frequently. I immediately cut down to 1 of this and put in some Enhanced Physique.

This is a much more exciting card for Ms. Marvel. With her larger hand size, morphogenetics, and various alter-ego effects, she can easily make sure she has an attack to play every turn, and with Embiggen! on the board, she will want to do that. Martial Prowess activates the overkill effect on Relentless Assault, and if you add the Biokinetic Polymer Suit, you're 2/3 of the way to an upgraded Drop Kick, too. Captain America can also do a lot with this. Before you get your Super-Soldier Serum out, it gives you the physical to stun with Heroic Strike. With the serum, it gives you easy Drop Kick.

I am not sure that any of the other current heroes really want this. She-Hulk and Thor probably don't have time to set it up; Doctor Strange and Black Widow care more about spells and preps. Wakanda Forever! isn't actually an attack event, so T'Challa has no targets in his base kit. Iron Man has 4 built-in attack events and will eventually have big hands to find them in, but does he want to add yet another upgrade to his rig? Captain Marvel has 3 Photonic Blasts, but sometimes she wants to pay for them with her triple-energy cards. She probably can't make Drop Kick work, but she can still load up on Relentless Assaults and Melees and then use her card filtering to find them. Spider-man has the web kicks, and will often exhaust to defend and use events to clear out enemy minions. He has to be cautious about threat, but should be able to get value from this if he can squeeze it in somewhere. He also has good synergy with Toe to Toe, and the Web-Shooters to enable Drop Kick.

With Rise of Red Skull around the corner, though, this card's future looks bright. Spider-Woman's dual aspects allow her to double dip on good events, using Martial Prowess to fuel Concussive Blow and Stealth Strike, or Tackle and Momentum Shift, and either package will interact nicely with Press the Advantage Several of Hawkeye's Arrow cards are attacks, so once his quiver is out he should be able to exploit this regularly, too.

OrionJA · 5
I actually don't use this in my Kamala aggro deck, but I'm playing with Jarnbjorn and leaning into ramp, so Enhanced Physique works better for me. I may switch to 1 of each if I add more copies of Drop Kick and drop the weapon. — ecamel · 10 9/4/20