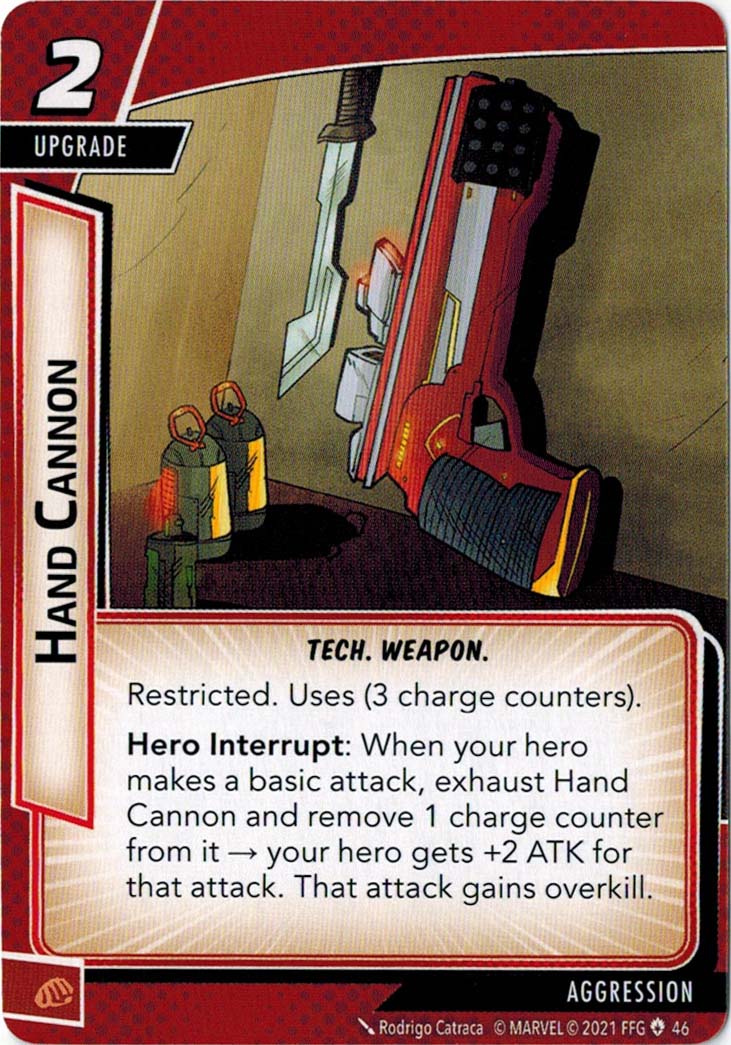 Iron Man might find a use for this Tech card because it adds to his hand size in hero mode, and once it is spent it can be returned from the discard pile using Stark Tower. This is nothing new for Tony; he was already doing this in protection with Energy Barrier and Electrostatic Armor, and in leadership with Power Gloves and Reinforced Suit. Yet being able to build his hand quicker in aggression opens up some interesting options to turn him into a pretty fierce basic attacker, thanks to Arc Reactor, Combat Training, Bug, and possibly Earth's Mightiest Heroes with some of the decent red avenger allies. It doesn't even clash with another weapon because he doesn't have any other hand-held / restricted items in his kit!

Another hero to really make good use of Hand Cannon is Quicksilver, for many of the same reasons with the multiple attacks per round to pile on the damage, and the lack of a clashing weapon.

Thor, Black Panther, Captain America, and Hawkeye all prefer Jarnbjorn. The real question is which weapons are going to find a home in Agent Venom...

The_Wall · 112
Hand Cannon itself has a physical resource, so you can always feed it to Jarnbjorn if you have Jarnbjorn in play. Black Panther could play both a JarnBjorn and a Hand Cannon. Also, I think Thor might actually prefer a Hand Cannon over the JarnBjorn. Thor doesn't have an easy time paying for Jarnbjorn, and if he ever uses Lightning Strike it's likely to set up a minion for a Hand Cannon Overkill. — OrionJA · 8 4/24/21
1

This card also works so well for Hulk, and for so many reasons. Not the least of which is that due to his "debuff" of having to discard your entire hand at the end of your turn, it works like a skilled strike (with overkill), without having to worry about having the right cards in your hand on any given turn, because this card stays on the table. As long as you're not giving him Jarnbjorn, you could have two copies of this card in play at one time. VERY good for Hulk aggression ...

It's about time aggression got some new weapons outside of Jarnbjorn. 2 resources (3 cards) for what's basically 3 Skilled Strike plus overkill on just one card is a hard offer to turn down. And if you don't want to use its effect right away, just bludgeon the enemy with it via Mean Swing. I could see this card enabling a "basic ATK" archetype for aggression when combined with the two aforementioned events and some hero with naturally high basic ATK like Hulk or She-Hulk. But, with the exception of ally-focused builds, I think just about any aggression can't go wrong packing a little bit of extra heat in their arsenal.

Nuke_Dukem · 9
The problem with this card is that it is restricted, so it is hard to use with Jarnbjorn and heroes like Thor, Cap, and Hawkeye who use permanent restricted cards. — Onions · 77 4/8/21
There are a lot of aggression builds that rely mostly on attack events and prefer exhausting the hero to thwart or defend. I think this will definitely be a centerpiece card for a new archetype but it's by no means universally good. — OrionJA · 8 4/8/21
Bug also fits really nice into the basic atk build — Kyonda · 1 4/8/21
I built a Spider-Woman deck based around Basic Attacking/Hand Cannon/Bug https://marvelcdb.com/decklist/view/9127/spider-woman-justice-aggression-i-m-going-to-hit-you-very-v-1.0 — trowa060 · 16 4/22/21