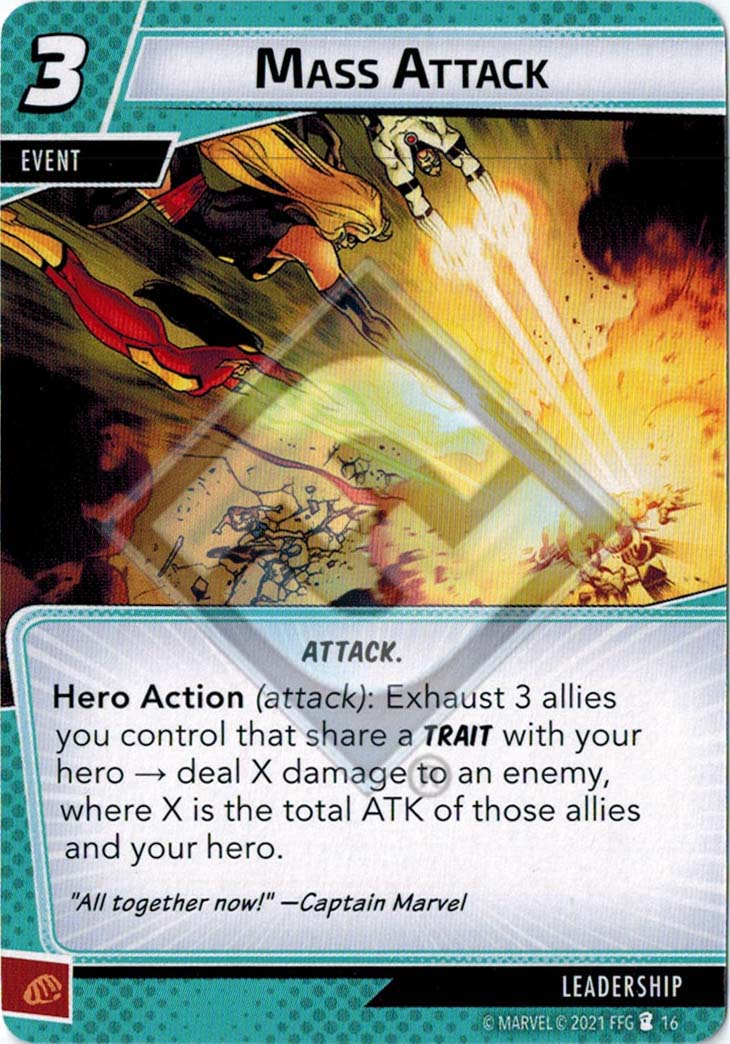 I can't read this card and not compare it to United We Stand. Since Mass Attack requires you to exhaust your allies, you obviously can't use them for the turn. That's comparable to using the 3 allies as normal, then healing up the consequential damage with United We Stand...for 3 resources fewer. Mass Attack adds in your hero's attack, but it's hard for that to add more than 3 damage, far from worth 3 resources. To top it off - Mass Attack has a big setup requirement of 3 allies that share a trait with your hero, so on a lot of turns, especially in the early game, it will be unplayable. Now, this is potentially an unfair comparison as UWS can regularly turn 1 resource into 4-6 damage, which is insane. You also might not be running an Avenger as your hero (but Avenger is probably the easiest way to get 3 allies and a hero with the same trait). Compared to other 3-cost attacks like Swinging Web Kick or Gamma Blast, Mass Attack actually does a comparable job. 3 2-ATK allies and a 2 ATK hero makes this deal 8 damage, and that's with fairly average stats. An exciting idea could be a Spider-Woman deck or a multiplayer game that can give your allies Enraged. Blade and Wonder Man are cheap allies that come to mind with high attack but steep attack costs that could also pair well with Mass Attack. This is a build-around card for sure, but it can fill a role as the heavy hitting attack event Leadership doesn't get much of.

Stretch22 · 182
Yep, definitely the right comparison to make. United We Stand is much easier to use, but the value can be a bit less, particularly if you're not facing off against a Stage 3+ villain. The other huge upside to UWS is that it is also very good at Thwarting, which isn't an option for Mass Attack. Situations where Mass Attack is better include non-Avenger decks (Guardian, or maybe Aerial), allies that have explicit extra costs, allies that take more than one consequential damage, enemies with Retaliate, or if you find yourself with Tough status on your allies that you don't want to lose just yet. — Fry · 56 1/11/22