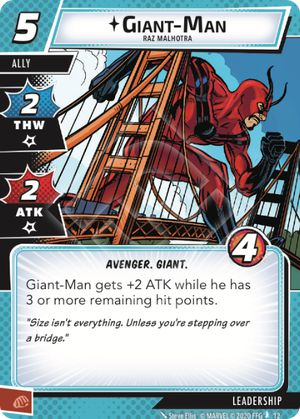 Giant-Man is a decently efficient ally by default. Especially when going the 8:4 route as describe above. His greatest weakness is the incredibly high cost to play. For many identities, this will be a huge wall to overcome. I would personally totally recommend against running this card in resource-starved decks like Hulk, She-Hulk, and Thor; unless you had something weird like Quinjet.

This card's strength and true value are found in HP increasing cards like Honorary Avenger, #Reinforced Suit, and Team Training.

Some quick maths assuming you ATK until he gets below his ability threshold, and then THW:

This means that cards like Honorary Avenger and Reinforced Suit provide double the value when being played on Giant-Man; while Team Training is just a way to keep Giant-Man going without actually providing much economic benefit.

If you're running Team Training, you could also run Rapid Response for some solid replay value and consistency. Additionally, his high base HP, plus any increased HP you might give him, makes him a good target for Inspired and Power Gloves. Not to mention the usefulness of cards like Inspiring Presence and Teamwork.