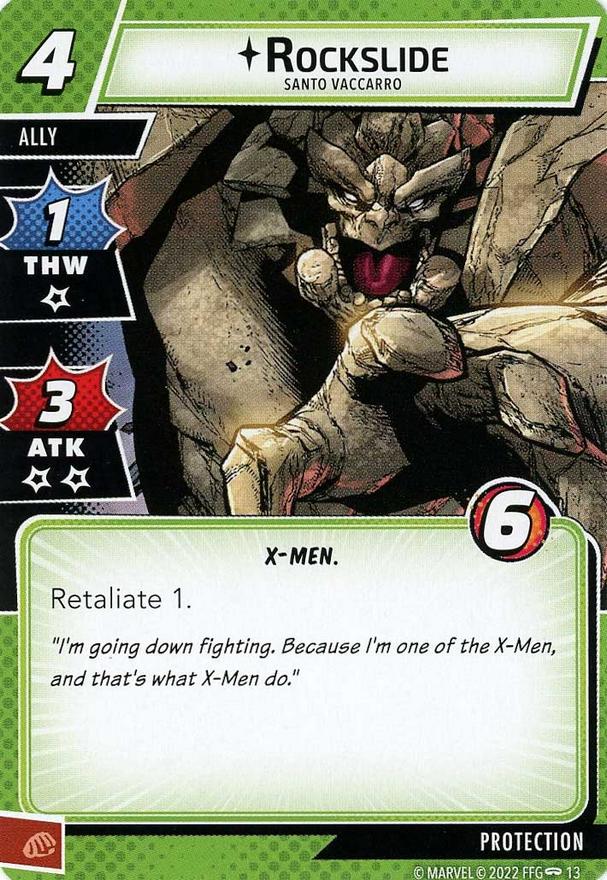 I think there are a lot of scenarios in which Rockslide can be an exceptional ally, but at face value I believe he has a lot to offer. First of all, he can dish out 9 damage before succumbing to consequential. There are not a lot of allies that can do that out of the box. On the defense side, he can take a solid hit from the villain and still be standing. Sure, it's not as effective as an ally that shows up with a Tough status, but there are only seven of those in the game right now (OCT2022). Of those seven, one belongs to Adam Warlock (Pip), two can have their cost reduced below 4 by other factors (Cap and Colossus) and and one can clear minions but barely survive two rounds (Thor). Captain America, Charlie-27, Colossus, Luke Cage, Pip the Troll, Thor and War Machine.

Yes, there are more that can acquire Toughness, but only seven come into play with it.

Protection doesn't have a lot of cheap allies, so a tank like Rockslide provides alternatives in the cost-heavy area. Sure, I'd rather have Clea most of the time, but this wall of damage doesn't suck. Particularly when you incorporate some of the new ally buffs that Mutant Genesis introduced.

Compared to other 4-cost allies like Martyr, Luke Cage, and Iron Fist, Rockslide doesn't impress me at face value. He plays worse with Med Team than the 2-ATK, 1 consequential damage allies, making him a worse long-game ally, but you don't want to block with him too early either, making him worse than the 2-cost play-activate-block allies. Where Rockslide shines is when you can make use of his X-Men trait. He wears a Protective Training very well, as the bump up to an odd health value gives him 2 extra 3-power attacks. And Rockslide is one of the best combo pieces with Mutant Protection, especially when used on a minion attack. I think you will always play Rockslide in your protection decks that care about the X-Men trait, but I am doubtful he will be too useful outside of that compared to the many great allies already in the game.