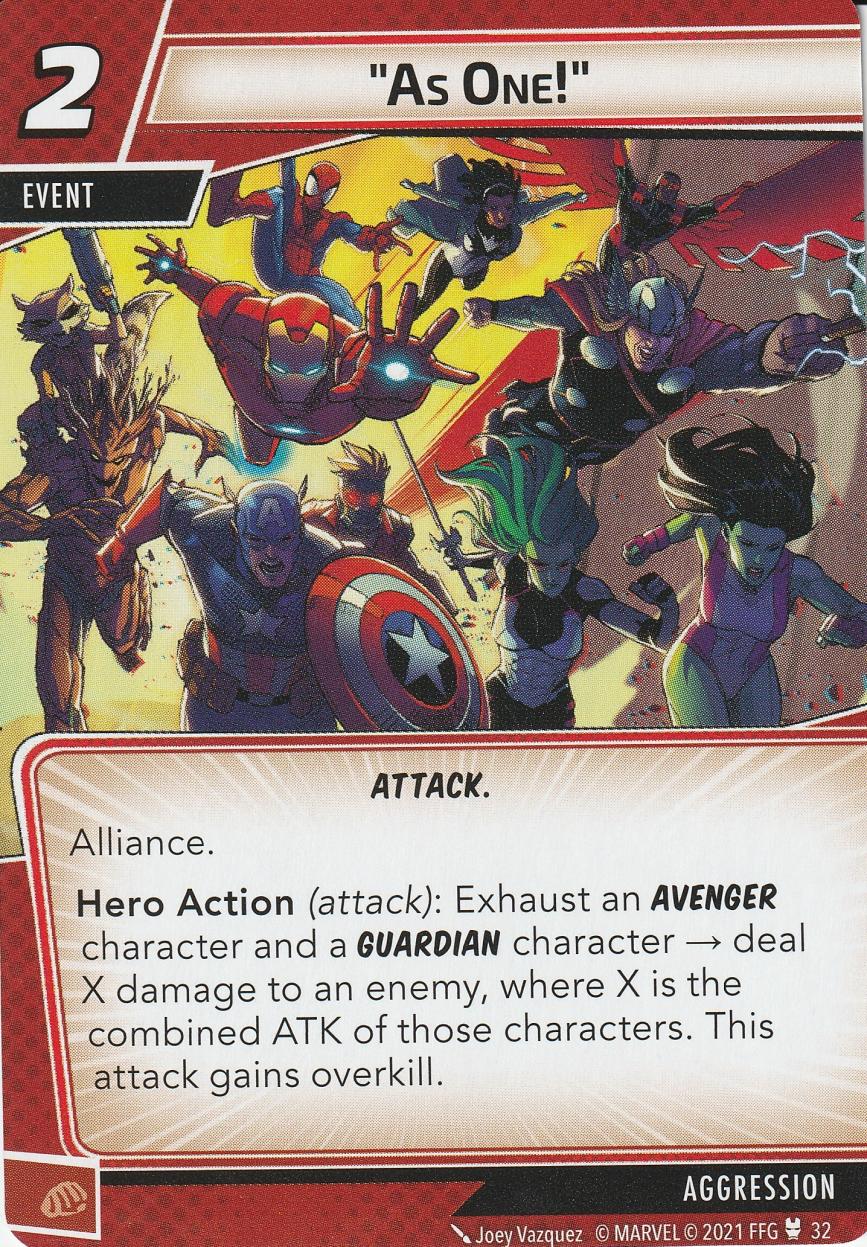 Don't throw As One! into any old deck. As One is its own deck archetype.

It might be tempting to evaluate this in comparison to Relentless Assault, but exhausting two characters is a very real cost, so I think it's better to evaluate it along those lines.

First, you probably don't want to exhaust heroes for this. Just attack with your heroes instead. Rarely* is there any point to spending 2+card to do what the basic game rules allow.

So, you should be exhausting two allies to play this. Well, your allies could just be exhausting to attack too, right? Attacking with allies has a cost, which for most allies is one point of consequential damage. Instead of paying 2+card for As One, you could probably pay 1+card for First Aid either before or after your allies attack, for roughly the same effect at a cheaper cost and not restricted to Aggression.

What is the actual use case for As One? When the cost of attacking with your allies is higher than one point of consequential damage. Wonder Man and Blade both cost a card to attack with, so if one of them is your Avenger, you're recovering some value. Wraith, Venom, and Captain Marvel all take extra consequential damage from attacking, so As One beats the First Aid test if you're using them. Still, if you're using As One with say Wonder Man and Wraith, and you're only getting six damage out, that's not much better than just Relentless Assault. You'd like to have some extra ATK buffs, such as Boot Camp.

In the broader context though, even a Boot Camp isn't doing enough for As One; you're spending 3+card on a support, and getting out two fairly specific allies (which are then taking up two of your precious ally slots) to enable you to play a 2+card attack for 8 damage. That's still not good enough. My friend, what you need for As One to be awesome is to have allies with even more ATK and that have even more prohibitively expensive costs for attacking. What you need is Enraged. Preferably in multiples. Enraged lets you take any old Avenger/Guardian ally, and make their cost to attack so prohibitively expensive that you'd lose your entire investment, while also boosting the ally's ATK a ton.

*- remember I said you don't want to use your hero for As One? Well, you can also add a cost of sorts to making basic attacks with your hero with Brute Force (the cost being that you have to discard Brute Force). Just Brute Force is probably not good enough to merit slots in your As One deck, but if you include some of the other Brute Force archetype cards (Smash the Problem, Quick Strike, The Best Defense…) it could be worth it.

Note: despite the flavor implication otherwise, technically your hero is making the As One attack even if you're exhausting two allies for it, so your hero will take any Retaliate damage, and a Stun status on your hero will apply.

Fry · 56
Good thoughts here. My favorite part is detailing the Allies that work well with this. Would add She-Hulk, as she is (no pun intended) a monster at her lowest health. — Judicator82 · 48 3/3/22
To go a step further using your example here: A She-Hulk at 1hp and Boot Camp puts her at five attacks, making it worthwhile is ALL you had was She-Hulk. — Judicator82 · 48 3/3/22