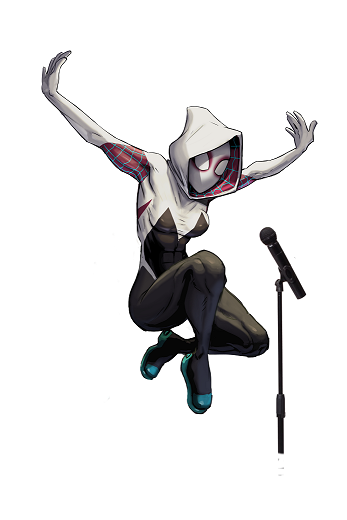 Hey, Ghost-Spider here. I just swung in, and boy are my arms tired. (laugh track) But seriously, folks. What's the deal with flying spiders? (laugh track)

Ghost-Spider is one of the most unique heroes in Marvel Champions. Once per phase, when you play an Interrupt or Response event, you can ready her. The wording is perhaps a little complicated, but it doesn’t seem too difficult to grasp. However, fully wrapping your head around using this ability takes much longer than you might realise. It essentially adds 'and ready Ghost-Spider' to any event that has interrupt or response (once per phase), but understanding how it works is only part of the battle. There are so many strategic avenues to get the most out of this ability, even in the most unlikely of places.

Stand Up Gwen is a deck that leverages her ability by making her stand up as much as possible. You will be able to throw an endless stream of quips and punches at the villain. Just remember, every time you ready, you have to tell a amazing spider-related pun to taunt the villain. Try saying 'Just stick around for a while!' after playing Web Binding or 'We don't choose the ballroom, just dance it in' when playing Pirouette and Punch. This deck has a moderate skill floor, meaning it's not too difficult to pick up and learn to play, and a high skill ceiling, meaning you will get better and better at playing it for a long time.

The primary events in her identity-specific cards that ready here are:

Also some other aspect and basic events to help round out the suite:

When playing any such event, not only do you ready Gwen, but draw cards with Web-Bracelet. To help oil the gears of this engine, George Stacy and Parental Guidance help you get exactly what you need when you need it.

This deck includes many allies that help synergise with her other abilities and card choices. Angela can pull minions to help with Throg and Chase Them Down. Bug can thwart every round since you are likely attacking at least once every round. Spider-Girl works with Web Binding to keep a minion locked down until you're ready to deal with it. Spider-Man Peter Parker readies you even more, and Throg can come into play and get a tough before you start punching away the bad guys.

Ghost-Spider has many events that are crucial for this engine to work, even ones you wouldn't normally consider and other cards that aren't interrupts or responses.

Ghost Kick and Phantom Flip are both response events, attack and thwart, respectively, that you can play after using any basic power. I think using Ghost Kick after an attack during the player phase is a solid way to rack up a lot of extra damage (at least 10), but It's important to note that using a defense action is also a basic power. That means you can thwart and attack during the villain phase with these events to defeat minions or side schemes before they can activate or abilities can trigger (like any with Hazard) by defending (and readying). Since her ability works once per phase, you should definitely consider using them in this way.

Pirouette and Punch and Web Binding similarly trigger during the villain phase, but usually that's the only time they trigger. If you have these, it's maybe best to save Ghost Kick of Phantom Flip for the next hero phase unless you have something else.

Chase Them Down and Skilled Strike are fairly efficient events on their own, thwarting or damaging for 2, but when you add 'and ready Ghost-Spider' to it, they really start to shine.

With a 3 DEF and lots of extra readies, Ghost-Spider doesn't necessarily need help defending, but The Best Defense… and Warning are included for that anyway. The Best Defense... does lower your DEF to 2, but goes back up to 3 with Combat Training and has a lot of value with 'and ready Ghost-Spider' at the end of it. Warning, an often overlooked card due to its history of being nerfed at every step of its life, even before it was officially released. But it has new life in Ghost-Spider because it has that ever-important 'and ready Ghost-Spider'. It prevents 1 damage whenever a hero would take any amount of damage, so you can play it when a hero would take damage from an attack, boost effect, treachery, even a villain ability like Taskmaster's. Importantly, it also works for retaliate damage, which means it can be used during the player phase as well. What was once a really maligned card has become a rather flexible utility. Keep in mind that if you defend and take no damage, you can't use it, so it's not some super powerful option suddenly, but it's actually playable in Ghost-Spider, in any aspect, and only gains in power in multiplayer since you can trigger it on any hero taking damage for any reason and still ready Ghost-Spider.

The last two events, Assess the Situation and Parental Guidance, don't ready Ghost-Spider but are still very important. Assess the Situation has a lot of value on its own because the cost curve of the deck is fairly low, so it's easy to squeeze out the most value out of each hand. It also works as part of a really fun combo, which will be explained below. Parental Guidance is valuable for adding additional cards to George Stacy (even recurring events from your discard) or finding George Stacy as quickly as possible.

George Stacy is crucial for this engine to work as well as it does. If you have too many interrupt and response events, consider banking one for later. It's also another piece to a great combo (discussed at the end).

Hall of Heroes and Helicarrier are some of your best resources options, not having access to things like Quincarrier or Knowhere. MINOR CAMPAIGN SPOILERS: Consider replacing Helicarrier with Avengers Mansion in the campaign.

If you utilise Web-Bracelets well, you should have one exhausted and one ready most of the time, using one in the player phase and one in the villain phase so that you can draw and ready each phase. It won't always work like that, and if you need to play more events in the player phase, you might also want to draw your cards. Just keep in mind that it might be a card you can't play or use as a resource, so drawing that card might be better suited for waiting for the villain phase, so you can start the next round with 1 extra card. Alternatively, if it's an event and you have room, you can stash it away on George Stacy. Regardless of your decisions, please bracelet responsibly.

Battle Fury and Combat Training just enhance what Ghost-Spider is already doing, giving her extra ATK when attacking, and accessing an additional ready.

Ticket to the Multiverse

Remember that combo I mentioned earlier? Well here's where it all comes together. Ticket to the Multiverse is a card that provides 2 resources or can be played and removed from the game to draw up to your hand size (and ready every Ghost-Spider card you control). During most of the game, you should be using it to help pay for things like Spider-Man or Web-Bracelet. But with George Stacy and Assess the Situation, you can build for a wonderful combo turn.

Either way, it's a really fun combo for Ghost-Spider and can absolutely turn the tide of a game in your favour or help push the momentum to close out the game quickly.

Moment of Triumph can help a lot if you're struggling to stay alive. If you include it, it works well with things like Hand Cannon, Relentless Assault, and Into the Fray to let you overkill the extra damage onto the villain or the main scheme. They're not included in the main build because they don't synergise with readying effects, but if you find that you have enough of them, they can be quite valuable. In a multiplayer game, you could forego some of the allies and include some of these options along with The Power of Aggression to help pay for it.

Many Spider-Man allies are decent here as well, including Hobbie Brown and Miles Morales. Miles also gives you access to Young Love, but he doesn't typically stay around too long, so it's an inconsistent option.

Additionally, staples like Endurance, Down Time, or Crew Quarters can stand in for extra healing.

Boot Camp and Energy Spear are interesting options for Angela and Bug in multiplayer, since you can keep using them every round, but it's hard to set up for just a few allies when you could be focusing on your hero.

Thank you, you've been a wonderful crowd tonight. I'll be back next week and remember, the 7:30 show is completely different from the 6:30 show. See you next time.