Welcome (Back) to the Church 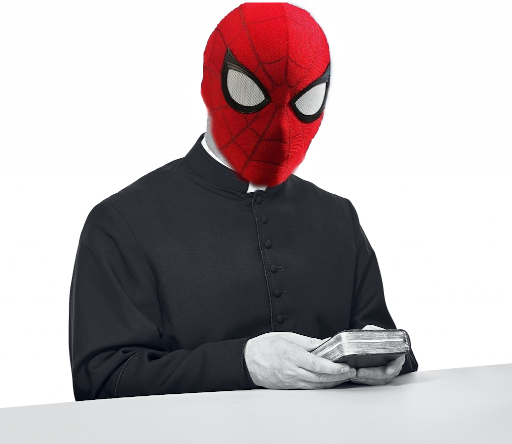 Excuse me? Do you have a moment to talk about our Lord and Saviour Spider-man?

Welcome my sisters and brothers back to The Holy Church of Protection Spider-man. I know many of you have blasphemed in the past, toiling with Inspired Black Cat, falling to the sins of Justice because of that sweet For Justice! synergy, or fighting with fists instead of feet.

But wander no longer my lost brethren and sistren. You were lost, but now are found, and His Holiness Peter the Unflappable forgives and welcomes all with open arms who return to The Church.

"Repent o ye sinners, those who have strayed from the path of the unflappable."

The Gospel According to Peter 15:63

Here is my latest Protection Spider-man deck. Most complaints about Protection are that the aspect is quite passive, but in my humble opinion, this deck is one of the most active ways you can play Protection while also defending nearly every turn.

There are quite a few flex cards this build, and some notes for customisation and building for the future, so don't just copy this card-for-card and think that's all this deck has to offer.

This deck overview will cover the core mechanics while also discussing specific cards, then discuss the rationale behind some of the card choices, and finally, go over customisation options, including notes about the future of this deck (including a spoiler for an unreleased card that will fit in very well here). So let's get to it.

With this deck, you are the shield against the villain so that all of your fellow players can execute their plans unimpeded. You should aim to defend as much as possible and generally do no other basic action. No attack, no thwart, not even recover. Many cards are included simply for their ability to support your fellow players. You are not a passive punching bag though. You are the righteous shield of faith that will defend the believers and smite the wicked.

Spider-Sense and Unflappable give you up to 2 additional cards every turn as long as you are defending, which is an enourmous amount of resource economy. Spider-Sense only rewards you if the villain is not stunned when attacking you that turn, but this usually only matters if you are the first player. Unflappable only gives you a card if you take no damage, but there's a wealth of synergy available to you in trying to achieve that:

While Spider-Sense and Unflappable both reward you for defending, Indomitable provides you with more opportunities to defend. Don't just use Indomitable every opportunity though; save its use for turns where you absolutely know that you will defend multiple times. Keep in mind that you should save it for later on turns where you can defend for someone else and use Backflip to save yourself as well. Just think of it this way: If you don't defend again after using Indomitable, you've used 2 cards for 2 ATK instead of 4+ DEF, which is not very efficient.

To help stretch the use of Indomitable while also dealing with cards like Assault or Gang-Up, some allies are included for their stun and chump-blocking capabilities. Namely, Clea, Iron Fist, and Mockingbird.

In addition to this, Spider-man can cancel troublesome treacheries with Enhanced Spider-Sense and Get Behind Me!. Enhanced Spider-Sense can cancel an attack with no ill effects, but Get Behind Me! can prompt an attack, which is helpful if the Villain was stunned that turn when it would have attacked you, or was Webbed Up up the whole Villain activation. In this way, you can get up to 2 cards in return, but you can also potentially trigger more Energy Barriers. For this reason, don't feel that Stun/Webbed Up are intrinsically counter-intuitive for Spider-man; there's at least one way around it.

When you need to heal, simply repent your sins to Sister May who will forgive you 4 damage on the turn you swap and 4 again on your next turn, usually healing you back up to full. Med Team and The Night Nurse are mainly for ally support and status card removal, respectively.

Armored Vest: extremely important card. Included because going from 3 DEF to 4 DEF is quite useful. Only 1 copy because it feels bad to have dead cards in your hand, and you dig through your deck fairly quickly. The resource allows Black Cat to search for this.

Energy Barrier: one of the most vital cards in the deck. Each one increases your DEF by 1 and gives you a targetable retaliate for 3 attacks--all for 3 cards.

Indomitable: allows extra DEF actions. Use sparingly. Thanks to the set-it-and-forget nature of this card and a little help from Energy Barrier, it works a bit more consistently than Desperate Defense.

Unflappable: one of the vital cards in the deck. Two copies so you can find it more quickly. Note that you can give your extra copy to another player to help thin your deck and maybe help them draw if they ever defend. again as always is good in Spider-man. One final note that I would mention is don't consider this card (or this deck) a failure if you don't draw every turn. At the end of the day, it's a card-drawing upgrade with only a cost of 1. It doesn't have to trigger every turn to be worth it.

There's a lot of flexibility with the allies. I would consider none of these absolutely necessary and will likely be heavily subject to change as the cardpool grows.

Clea: high priority. Clea is quite useful as a backup on turns where someone draws Assault. Without her, you either need to burn an Indomitable (risking that no one draws an Assault anyway), or simply face-tank the attack. Things get a bit more dicey when someone draws Gang-Up, and Clea is ready and willing to die for the cause and keep coming back for more.

Iron Fist: high priority. Stuns are great. If you're not first player, there's absolutely no downside. If you are the first player, you can still get Unflappable triggers. After 2 stuns, is perfectly able to chump block an attack, so 3 prevented attacks for 5 cards is quite the bargain.

Mockingbird: moderate priority. Not as good as Iron Fist, but better than Tackle.

Med Team: high priority. Each token heals 2 damage from an ally that can be usually at least 4 ATK/THW, which is insane value when you consider that you get 3 tokens for 4 cards. If you include Black Widow or Brother Voodoo, don't heal them. Your fellow players will likely have some better targets.

The Night Nurse: high priority. Remember that this can only be used to heal heroes, but it's really efficient (2 cards for 3 damage), but also removes status cards as well. Dropping Stun or Confused from a fellow hero can really keep the tempo going

The only other upgrade I consider worth contemplating is Defensive Stance, which can help you in case you take a huge hit and can't defend or for some reason take an overwhelming attack while defending. I wouldn't include more than 1 since you don't want a dead card. Don't use this just to prevent 1 damage 'because you can draw a card' (unless it prevents you from dying). Remember that you paid 3 for it. The biggest hit against it is Endurance is 1 card cheaper for effectively the same result.

And on that note, Down Time and Endurance are often included in many decks, but the goal of this deck is to take no damage while defending and use Aunt May to heal, so neither of these fit very well here. If you're worried about finding Aunt May in time or worried about a lot of extra attack power, these can be considered though.

All of that said, Electrostatic Armor (upcoming Hulk pack) will be a mainstay for most protection decks, giving Retaliate 1 for the first attack you defend against each turn. It will be absolutely crucial, so as soon as you get Hulk, find a way to include it.

Black Widow: Her cancel ability is cheaper, has broader use, but is ultimately less powerful than Enhanced Spider-Sense and Get Behind Me!. She could be included as a backup option and some additional THW, but does not provide very much overall and chews through Med Team tokens really inefficiently compared to some other allies your fellow players might have. One of the biggest problems here is that she is unplayable in games where someone chooses the very strong hero version, but if extra THW/'cancellation' is important for you, she is one of the best options available.

Brother Voodoo: He is slightly more efficient at THW than Black Widow since you can also draw a card but is equally as inefficient at using Met Team. The card draw is also inconsistent in this deck, having a decent chance in the five cards you search, only 1 event will be present (the odds get higher the longer you play permanents, but the math is still not very comforting), but if extra THW is important for you, he is one of the best options so far.

Luke Cage: With Toughness and 5 HP, he can provide a beefier alternative to Clea, Iron Fist to soak up attacks, but he's quite expensive and deals with an inconsistent number of attacks and damage. Unlike Clea, he doesn't come back easily, but he's only 1 card more expensive than Mockingbird, but doesn't have an immediate impact on the board. If you're dead-set on including Cage, I'd recommend replacing Mockingbird for him.

Quincarrier: Since it is unique, Quincarrier should be discussed with your group before playing. As it as a resource, you can dig for it a bit more easily than others, but you don't really gain any particular benefit from and also have Web-Shooters. If you don't include this, I would recommend replacing it with an additional Avengers Mansion.

There's only 1 non-Spider-man event, what could you possibly talk about here?

Desperate Defense can be included in addition to Indomitable if you are playing high-player-count games to give you more opportunities to defend. However, keep in mind that if you use this card and ready, even if you get a card from Unflappable, but you don't defend again that turn, you've simply used this card for 2 ATK. You're better off using Preemptive Strike at that point, which I explain below is not particularly useful.

Get Behind Me! is actually not a high priority. As I explained earlier, it's fine for turns where the villain was stunned and you didn't get your Spider-Sense or Unflappable draws, but outside of those specific scenarios, Enhanced Spider-Sense is strictly better, and even in those instances, enhanced might still be better anyway. Mainly include this only if you want a lot of additional cancel.

Preemptive Strike can be included in addition to Energy Barrier, but should not overwrite it. The only benefit it has is that it's cheaper. Barrier is just simply more consistent, has a much broader range of use, and you will always get 3 prevented damage while doing 3 damage in return. Preemptive is inconsistent in its effect because it has a much narrower opportunity for use and takes up a card in your hand until you can trigger it.

Tackle is another option. With access to and a surprising amount of , Tackle has a decent chance to trigger. However, Mockingbird is quite a bit more consistent at doing what this deck wants to do, especially since Tackle is vulnerable to Stun.

It will be a while (after Hulk) until we get some new Protection cards, but the future of Protection Spider-man still looks bright. Electrostatic Armor will fit so well you'll wonder what it was like to play without it, and I'm sure newer allies and events will change how the deck is built, but until that time, we welcome you (back) to the Church of Protection Spider-man.